Apolipoprotein B (ApoB) is an important component of many lipoproteins that are involved in atherosclerosis and cardiovascular disease.

Atherosclerosis may be described as a chronic inflammation in the arterial wall. It is caused by a complex interplay between lipoproteins, white blood cells (macrophages), the immune system and the normal elements of the arterial wall.

This process leads to formations of atherosclerotic lesions or plaques that may protrude into the lumen of the artery causing arterial narrowing, which may ultimately limit blood flow.

Rupture of an atherosclerotic plaque may lead to thrombosis (blood clotting) causing an acute occlusion (blockage) of the artery. If this happens in a coronary artery it may cause an acute myocardial infarction (acute heart attack).

There are many factors that contribute to atherosclerosis, one of which is elevated blood levels of cholesterol.

Although cholesterol is an essential substance, elevated plasma levels appear to play an important role in the initiation and progression of atherosclerosis. In animal models, atherosclerosis will not occur in the absence of greatly elevated levels of plasma cholesterol.

High levels of plasma cholesterol also appear to be an important contributor to atherosclerosis in humans, although the threshold level of plasma cholesterol that must be exceeded to produce clinically relevant disease appears to be much lower than that in animal models, possibly because lesion formation occurs over many decades.

Because fats are insoluble in water, cholesterol can not be transported in blood on its own.

The body’s solution to this problem is to bind cholesterol to certain proteins that function as transport vehicles carrying different types of fats such as cholesterol, triglycerides (TG) and phospholipids. These combinations of fats and protein are termed lipoproteins.

It is important to emphasize, that it is lipoprotein that interact with the arterial wall and initiate the cascade of events that leads to atherosclerosis.

Cholesterol is only one of many components of lipoproteins.  Therefore, measurements of total cholesterol provide little information about the lipoproteins that transport the bulk of cholesterol.

There is a strong and graded correlation between low density lipoprotein cholesterol (LDL-C) and the risk of CVD, both in women and men, although this has been debated by some investigators.

Although LDL’s seem to be the most atherogenic particles, it has to remembered that VLDL and other apoB – containing lipoproteins may also contribute to atherosclerosis.

Lipoproteins are the particles that transport cholesterol and triglycerides in the blood stream.

Lipoproteins are comprised of proteins (apolipoproteins), phospholipids, triglycerides and cholesterol. The lipoproteins vary in the major lipoprotein present, and the relative contents of the different lipid components. ApoB is an important component of many of the most atherogenic lipoprotein particles.

ApoB occurs in 2 main forms, apoB 48 and apoB 100. ApoB 48 is synthesized mainly by the small intestine. ApoB 100 is the apolipoprotein found in lipoproteins synthesized by the liver. Therefore, from the viewpoint of atherosclerosis and cardiovascular risk, apoB100 is the important one. ApoB 48 is primarily found in chylomicrons.

ApoB 100 is found in chylomicrons, VLDL, IDL, LDL and LP(a) particles. All these particles are atherogenic. Each of these particles contains a single apoB molecule. Therefore, measurements of apoB represent the total burden of the main lipoprotein particles involved in the atherosclerotic process.

Usually, 85-90 percent of apoB represent LDL particles. Thus, apoB reflects particle concentration, similar to LDL-P. Although measurements of apoB are not widely available, the assay has been standardized and does not require a fasting sample.

Several studies have shown that apoB may be a better predictor of cardiovascular disease risk than LDL-C. Furthermore, it has been shown that apoB may be elevated despite normal or low concentrations of LDL-C. ApoB also appears to predict on-treatment risk, when LDL-C has been lowered by statin therapy. The INTERHEART study found that the apoB/apoA1 ratio is more effective at predicting heart attack risk, than either the apoB or apoA1 measure alone.

Apo B containing lipoproteins are the ones that are most likely to enter the wall of the arteries. They are capable of trafficking cholesterol into the artery wall, and if present in increased numbers they may be the main initiating factor in atherosclerosis. Retention of ApoB containing lipoprotein particles within the arterial wall is an essential part of the process.

Usually less than 100 mg/dL is considered desirable in low or intermediate risk individuals.

Less than 80 mg/dL is desirable in high risk individuals, such as those with cardiovascular disease or diabetes.

How to Lower ApoB

Many doctors will recommend the same general measures to lower apoB as they do for lowering LDL-C. Thus, reducing the amount of saturated fats and cholesterol is often recommended together with increased consumption of vegetables, fiber and mono-and polyunsaturated (omega-3) fatty acids.

Physical exercise has also been shown to lower apoB and positively affect the apoB/apoA1 ratio, but the effect on LDL-C appears to be much smaller.

ApoB levels can be reduced by cholesterol lowering drugs (statins).

This site uses Akismet to reduce spam. Learn how your comment data is processed. 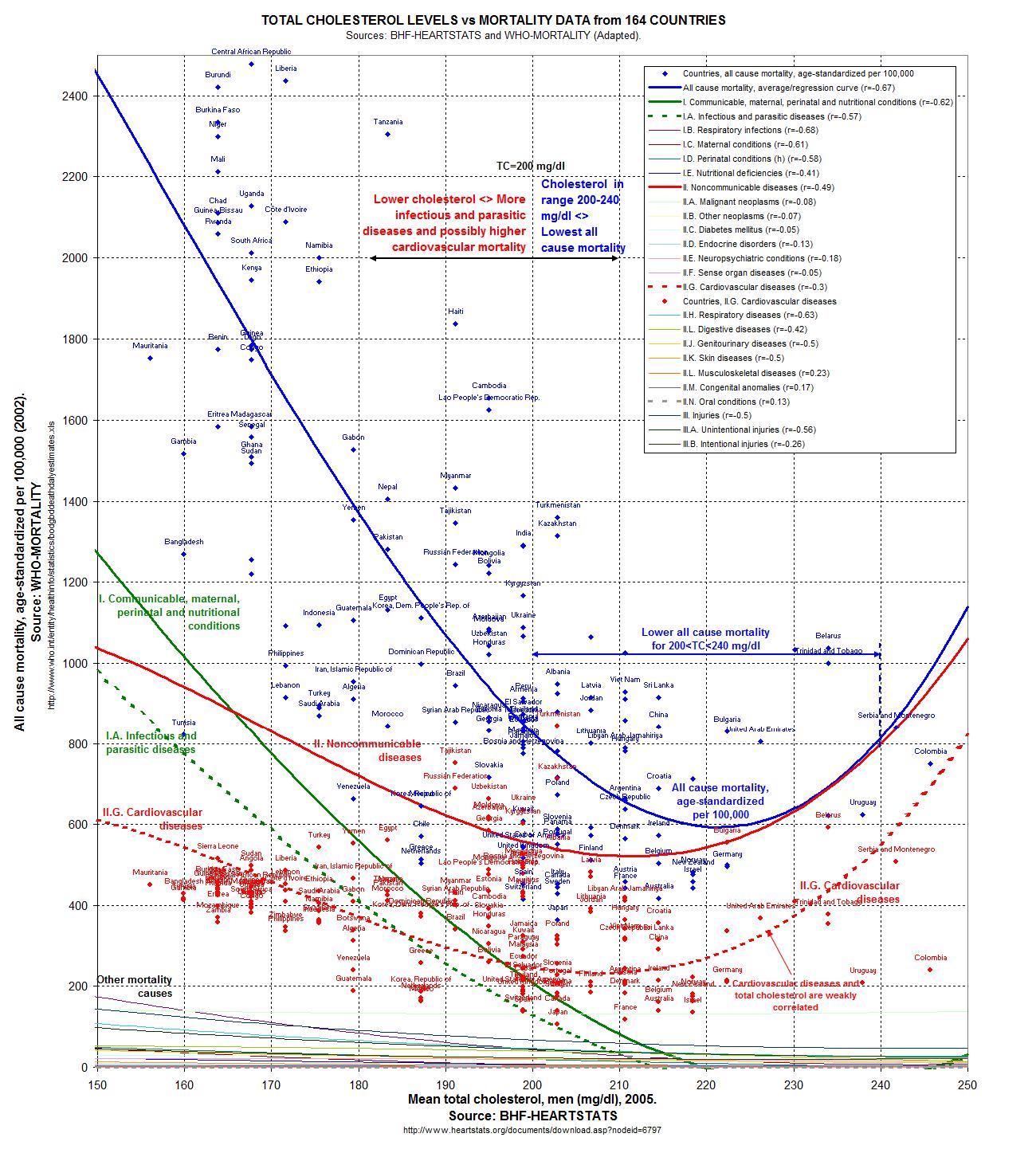 Thanks David for these useful comments. By focusing so much on cholesterol in itself being harmful, we have become quite confused through the decades. This has sometimes lead to misunderstanding and unnecessary debates. Although the epidemiological studies indicate an association between cholesterol and cardiovascular risk, the data is confusing, not least when it comes to total mortality, where we have seen that those with the lowest cholesterol levels have high mortality. This is very well demonstrated in your last reference. Furthermore, the possible association between low cholesterol and cancer has never been really shut down as you also point out.… Read more »

Where can I obtain a lipoprotien apoB 48 and apoB 100 blood test?
Can you recommend a clinic

The link between very low LDL and cancer or any other negative health outcome found to be not true:
https://www.pace-cme.org/d/501/exploring-the-benefit-of-lower-than-recommended-ldl-c-levels

Hey I presume that you have read Dr Attias blogpost about it?

Not that I do think you mised it.. but for your readers, its a longer an more complex explanation, for those how is nerds about this topic!

I was wondering if you address the role of Lp(a) and how to address having a very high value (mine is 425!). Thanks.

@ Edith Nir.
Thanks for the comment.
I have addressed Lp(a) in another article here.

After a car accident in 2008 I began having daily headaches and then migraines. Not one to want to be on medications, I decided to try the ketogenic diet hoping that would help. I have been following a ketogenic diet for the past year (more strictly at some point that others- but recently very good) and I have since taken myself off of my daily migraine medications! I have had my second blood test over the last year and although my general cholesterol numbers are good, my lipid panel for Apo B and LDL-P have gotten worse. My basics –… Read more »

Heart disease is not a product of too much cholesterol, but rather a lack thereof. Statins are the worse thing you can put in your body for a million different reasons. Most heart disease is a lack of sulfur or cholesterol sulfate (get more sun!). Donate blood if your blood viscosity is high a couple times a year, studies have show that those that do this have 75-80% less chance to suffer a heart attack. Drink lots of water and do this instead of taking a blood thinner. Blood thinners and Statins are the ‘norm’ must take with any cardiovascular… Read more »

Paul, your story is inpsiring. It’s scary to take matters into one’s own hands but when you are faced with something like that, it only makes sense to do so. My cholesterol has always been high, due to hereditary factors, but it has been going up. My Apo B is high. My LIpo A is also high. And LDL-C High. But I have very good HDL. I always thought that was enough to protect me but now I’m not so sure. It seems hopeful that if I follow at least some of the nutrion/exercise guidelines it could get better. Thanks… Read more »

Hello guys, I hope someone will be able to respond .. As I fell in the same situation as Paul Did, heart attack, 2 stents, and still have 4 plugged arteries… been on and off medications for the past 6 month, and doing a monthly blood test trying to monitor everything… Trying to fly to the USA to get the LDL Particle done, as we do not have it in Canada. But this is my latest results, and it;s kinda scary, as I am doing the Paleo / Ketogetnic Diet… Zero carbs for 4 month now LDL = 392 HDL… Read more »

Maurice
With this ApoB level your LDL-P will most likely be high as well. You would definitely want to see lower numbers in someone with coronary artery disease. Are you taking statins?

I was off for a while, doing testing back and forth, but I am back on it again.. to figure a way to control it better… I am taking Lipitor 10mg to support a bit, as if I take higher dosage I tend to get foggy…

your LDL rate is a bit scary, stop eating animal fats and eat lots of fish, avocado and olive oil. I’m just starting on this plan – going to eat fish tacos every day for starters, using olive oil. my ApoB is lower than yours but my MD wants to put me on statins.

I think one of the mistake I was doing, when I went full Keto .. I stopped all the carbs, lost all the weight felt great, but increased too much fat, 5 to7 spoons of coconut oil, plus I was consuming lots of the animal meat as well.. possibly that increased by apoB to increase dramatically. for the past 3 weeks none of that stuff and a new blood test is getting done soon. so I hope it has dropped normal range…

Here’s a good read where you can also find citations to scientific papers.

I have been watching my cholesterol for the last 10 years of so because my father died of a heart attack age 58. My numbers have been reletivly good, always very high HDL (1.8-1.9 mmol) and total cholesterol around 6 mmol. I also had a calcium score a few months ago and it came out with score 0. All good, I am 55 years now and it seems that I may live longer than my father. The last test i took was APO lipo proteins, hsCPR, lp(a) and a direct LDL measurement. And the results Direct LDL 123 mg/dL (3.2… Read more »